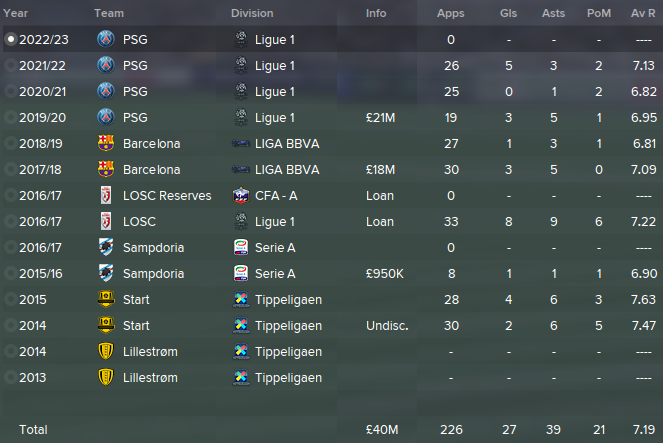 This FM 2015 player profile of Kristoffer Ajer shows probably the cheapest central midfielder in the game and one capable of attracting Barcelona and PSG. That £9.66K asking price comes at the very start of a new game, you need to approach to sign this player before Start offer him a contract. Do that and you’ve got one of the great bargains in FM15.

During my test save Barcelona stumped up £18 million where Ajer played 57 games in two years before PSG bought him fro £21 million, using the Norwegian as part first team part rotation. Developing 17 in passing, decisions, strength and even 18 in vision and jumping shows how rounded Ajer can be. Sat in front of the defence he is a dominating figure to to beat both in the air and on the floor. with a good technique and first touch Ajer can also shoot from range, he’s got the complete package for a holding midfielder or roaming playmaker.

Did you check out Martin Ødegaard?

He isn’t in the game unfortunately, due to his age.

Is Mats Daehli any good on 15?

Quite good, not as good as 14 though.

I was able to sign this guy for £925 at the very start of the game, which is an absolute steal. A perfect replacement for song after the first season on my West ham save.

If you go to the Steam workshop (assuming you have the game on Steam??) you can get Martin Ødegaard’s player profile to put into the game :)

You can get Odegaard yes but we won’t be profiling him until he’s officially apart of the game.

Well this profile was done before the most recent patch, so he may not be available for the same money. Or Start have already offered him a new contract rendering the approach to sign option void.

Can’t find him, oddly. I have large database as well as Norwegian League

Strange, they must have taken him off the game, thats annoying.

fantastic player. bought him to Barcelona and put Busquets on the bench in my second season and is just perfect

[…] veterans over the last two iterations of the game. Players like Youri Tielemans, Memphis Depay and Kristoffer Ajer (the greatest bargain of all time?) have gained momentum of late, but only in FM15. If you go back […]