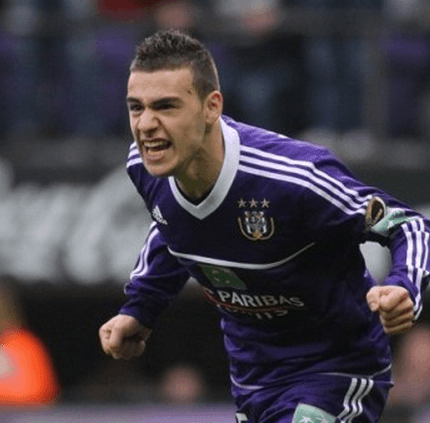 This FM 2014 player profile of Massimo Bruno shows a versatile winger who can be your utility man and rotate in almost any squad from the off. I’ll be the first to admit this kids attributes don’t exactly excite me, but having seen him in action Bruno is consistent and does a good job of running the flank. The young Belgian didn’t have full PA during my test save and he didn’t even reach his potential from the save, but still became a stalwart on the Hoffenheim first team.

Anderlecht want £9 million for Bruno, too much in my opinion, but their expectations do drop so keep an eye out as I think he’s worth £6 million or under…that would be a reasonable price for such a sturdy player with well rounded ability.

He’s a good player. I bought him in my first season with Udinese in January.
I am now in Janurary in my second season and his stats are already better than the above profile so he can definitely be a lot better, worth a punt, bought him for around 10mill and I think he was well worth it!!

Well if you get past 2017 please do send in a screenshot as we could use one.

he has grown a little better under my management, great all-round winger: http://i.imgur.com/b7uSDyX.png

If you have him a couple more years we’d certainly like to use the screenshots, let me know if you do mate.

yeah ive a bit of a way to go but when I eventually get to 2017 and if I still have him I’ll send you’s in the screenshot!

He played very well against my team (Benfica) this past Wednesday…even scored a goal. Unfortunately, for him, not me xD, Anderlecht was on the losing side, but that’s football

That PA may not be correct, i am in 2016 and is quality is already better than your 2020 screenshot. for me the best winger this year! Rodrigo Gomez profile its better than Massimo, but, Massimo Bruno performance its just from an other world.

If by PA you mean the figure we show at the top of the post its definitely correct.

You’re going off an assumption because you feel he performed exceptionally well for you, but I haven’t just guessed this figure.

Is he of of a higher grade than Allione – another utility player? Allione looks like a value buy and I’m unsure who to get as a backup RW to Gerard D (Barca)

They’re probably similar though I reckon Allione may grow to the better player.

And Gerard D (Barca) VS Bruno for the RW slot?

Both quite different players but for me I’d pick Gerard as he is younger and has a higher PA.

Playing with Anderlecht and he totally kicks ass in the belgian league. Not sure if he is good enough for better teams though.