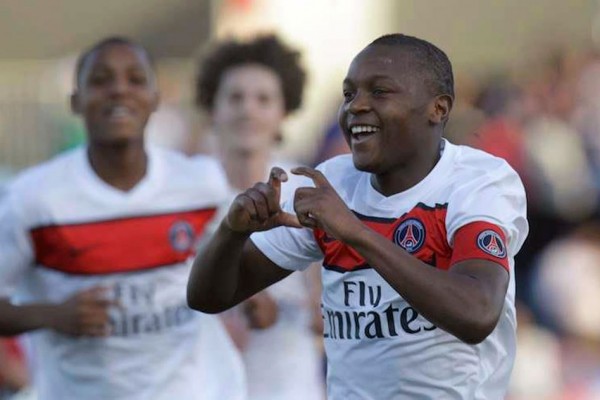 This FM 2014 player profile of Hervin Ongenda shows a quick young striker, a lad that can become a reliable front man in a few years. He needs developing at the age of 18 and PSG want 5.5 million for him at the start of the game, not exactly cheap but not expensive either considering his potential.

In my test save he spent a few seasons on loan before being sold to Club Brugge in Belgium. He finally found his place there, scoring 18 goals in a season. His future profile shows a striker with great speed and agility, composed in front of goal and also a very good set piece taker. This kid should be on your shortlist, you might be able to get him even cheaper at some point.

I have managed to have him on loan on my Partick Thistle save and he has developed really good. I will share a screenshot when I get home. He is also out of contract in 12months so I should be able to approach him on a bosman just as his existing loan period runs out! He is younger and better than the above screenshot

In my save last 2 seasons on loan at Villareal he’s scored 15 and 21 goals. Still in the PSG reserves though :/

Oh well, I guess it’s tough to take Ibrahimovic or Cavani out of the first team squad ;)

Has anyone done a profile on Ryan Gauld & John Souttar at Dundee Utd?

Both Good players, Arsenal snapped them both up in my Partick Thistle save. Souttar gets a few games for arsenal…not a regular though, And Gauld has been on loan in Scotland and just missed out on player of the season against one of my players, Just starting my 17/18 season and have got him on loan now so I will let you know how he goes.