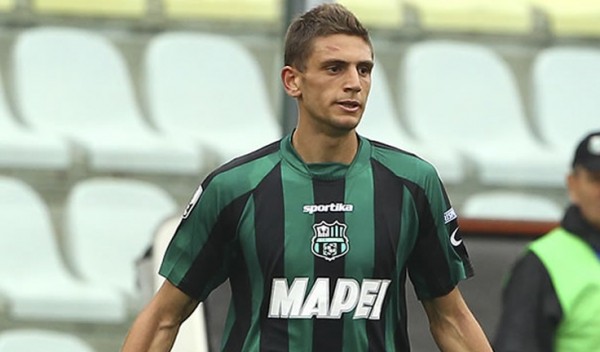 This FM 2014 player profile of Domenico Berardi shows a huge talent, a youngster that can become a world class trequartista in Football Manager 2014. He starts at Sassuolo but he is co-owned by Juventus, so you will have to pay 15 million to each of those two clubs if you want to get him at the start of the game. So I guess you might want to wait until the co-ownership thing is settled by that doesn’t mean you would get him for less.

In my test save Juventus managed to buy Sassuolo’s half but then they sold him to Tottenham for no less than 33.5 million. And he was well worth it as he took the Premier League by storm, delivering goals and assists in each of his three seasons in England.

His attributes in 2020 are not bad at all, exquisite technique, awesome flair and creativity plus great speed and agility. This lad can surely become world class, just wish he was a tiny bit cheaper.

UPDATE: You can now see how Berardi can develop under human management, screen shots provided by Bjork Lange.

Any idea how Zeli Ismail turns out?

Not much in my test save unfortunately.

@Johnny Will you take a look at Pierre-Emile Højbjerg from Bayern Munich?

Also take a look at Angel Correa from San Lorenzo…

Both turned out decent in my test save, might be worth profiling but not very high on the priority list.

Both turned out decent in my test save, might be worth profiling but not very high on the priority list.

Great work from u guys as usual. Love the site this year again. Domenico is certainly a great trequartista. A special talent because I think there aren’t too many good young players of his type, which just makes him more exciting in my opinion. I have him at a Inter save where he is allready a fan favorite at 21 and also a little bit better than this screenshot above. I hope he can continue to develop into a club legend for my Inter team.

Thanks mate, good luck with developing this talented player.

Playing very good as a false nine in my system

I got this guy for 4 million (2 million to each club) before the beginning of season 2 summer transfer window for my Newcastle side. Only problem is that I already have Fierro and Rescaldani and I’m playing with 1 striker. Have Mitrovic joining in next year.

Great buy at 4 mil, if you don’t play him you can surely make a profit.

Just got him on a free in 2016! Good player already hopefully he continues his development.

That’s not a bargain, it’s a steal! He’s a quality player, should do very well for you.

i bought him for 5.5 Million i gave sassulo ( 2600 M) and juve ( 2600) right on the begining of the game , but i still don know how to get the best out of him. so i ask should i train him as complete foward to develop him , and after that focus in the procher role _?

I think you should train him for whichever role you want to play him in.

thats fantastic, i just wondering BJORK LANGE definitely had special method to develop player, as some his player like Benassi and Rugani also develops well, If don’t mind it’s really great to knows the all method, thanks before to JOHNNY KRAP for this site always ahead than any on FM Series :)

Thanks. I don’t think Bjork has a special method but if he sees this he might explain.

I read that he’s got some boost in his stats on the 14.3 patch. do you mind to change the initial profile based on the new patch? thanks in advanced

We have already updated the asking price and CA/PA data, we will update the initial profile screen shots as well but it takes a bit of time given the pretty big number of profiles we have.

At first I think no special method but after I played on my Tottenham at 2016 looks same with first screenshot (not Bjork Lange) @ year 2020, we can see on Bjork Lange, Berardi had all special ability as striker even just in season 2017, bro Johnny are you already tried Berardi on your game saved? thanks a lot for your great forum :)

still hard to believe BJORK LANGE can develop attributes like that, would anybody help me to train players like him :(

I bought this player for 3.5 million in my second season with Swansea :)

That’s quite a bargain, you might be able to sell him for 10 times that amount!