This FM 2015 player profile of Memphis Depay shows a winger with world class pedigree, an ability underlined by technique makes this lad a must buy. The £24 million asking price may seem high, but Depay is a top talent and sometimes you get what you pay for.

Due to Depay’s natural goal scoring ability a role of inside forward from the left is best, but you could also try the new role, Raumdeuter, just don’t expect him to see as much of the ball.

The Dutch superstar will get you goals and assists galore, with amazing technique his set piece ability can tilt a game in your favour and long range shooting can craft a goal from nothing. Add excellent flair, determination and speed you’ve got yourself a key asset. The future future screenshots say it all really.

Update – Below are screenshots of Depay in the latest patch aged 22. J492 used Depay as a complete forward and has seen great results early on. 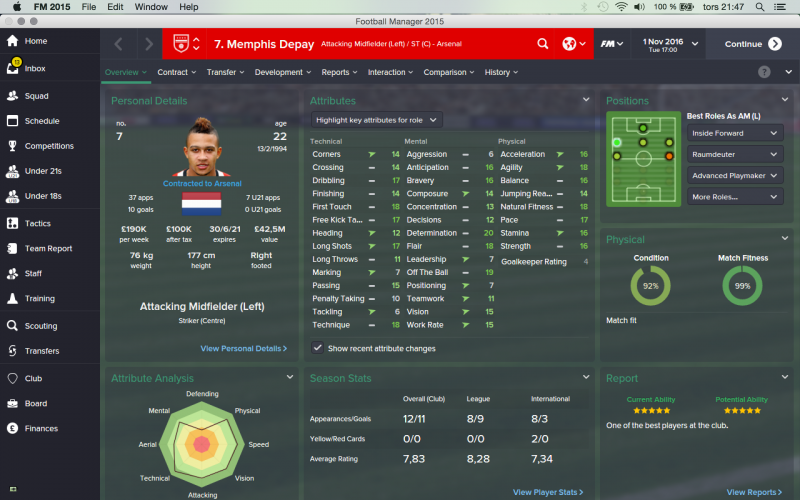 managing spurs, bought him for 16 M€

I actually expected more from his this year, after his great world cup and fifa rating him so high, I wonder if he has flexible PA….

I should think he will TBH, so he may get even better than this.

Hi, I was able to pick him up for £12 million (£10 million, £2 million in unlikely add-ons) at the start of the game as Arsenal. That was on the demo. But he is a brilliant player- this year’s Insigne. He scores and assists for fun.

Again a good deal, not so sure he’ll be so cheap when the game is fully released though.

What a beast this guy is! I Managed to sign him for Newcastle 2nd season for £21 million.

So far he’s got 16 goals, 10 assists and 5 PoM’s (Also won Golden Boy award) and has me sitting pretty at the top of the table with 3 games to play. He can really get you out of some tricky situations with free kick goals and wonder strikes from distance that can turn draws/losses in to wins.

Also what facepack are you using, Darren? Where can i download it?

Hi Jak, he is indeed a beast and as you mentioned that set piece ability can get you out of a hole. I am actually not using a Facepack, those are just in game normally, not every player has a face though.

He was my first signing in my Man Utd career in beta and now in my second season, I regularly swap him and DiMaria depending on fitness. So far he won Golden Boy in season 2 with goal of the month 5 times, so far all long range sniper shots. He’s a must buy for me this year on every career that I have the budget for him.

He certainly seems like the must buy, can turn a game on its head.

Wow. I started a new game with PSV and my version of Depay only has 10 determination and dreads important matches… he still loves to score though.

Yes he does seem to vary in determination from save to save.

Will you do profiles on bruma and adama traore? both incredible wingers on my save.

We will do at some point yes.

His determination must have gotten a nerf since beta because he only has 10 now instead of 19. Seems like it isn’t just me that this has happened to either. Correct me if I’m wrong though, because everything else in his profile is exactly the same.

It now varies from game to game, sometimes its low sometimes high.

Yeah he’s been a very consistent performer for me, play him as an IF and expect a good return for goals. I had to train to not shoot from distance as much as he is a very greedy player, so don’t expect many assists from him until you do so. He ended up being my top scorer last season and am now going to retrain him to play a F9 as I purchased Neymar. Could you also profile Kingsley Coman of Juventus, just splashed a whopping 104m on him but he is just insanely good!

Has Depay got worse after the update do you know dude? He was insanely good, but he’s went off the boil for me. Who do you think is better- Depay, Brandt or Draxler? I was thinking of selling Depay and getting one of those if they were better…

I don’t believe so. And even if he had he wouldn’t change in a save you had already started, he would only change once you begin a completely new save.

I would say that Depay is just as good as the other two, but if you wanted a change I’d scout both options and go off your reports, I haven’t used them myself so wouldn’t have much more insight than what you’ll have.

Do you think Depay could play in the false nine role?

In the right system he could yes, I had him at F9 as part of a front three and he scored goals.

A bit of a strange question but what is the best centre back pairing and attacking front three combination you have created or come across?

Thats a hard question to answer, not sure how it would help as you’ll be limited to who is available anyway. But my best attacking front three was Boye, Berardi and Jovic.

Uploaded some screenshots of Depay at 22 on my save: He’s absolutely incredible as a Complete Forward. Cost me around £23m on the update but he’s just hit 50 goals for the season and its only half way through february.

how long did it take for him to settle in the complete forward role. My 1st season at Man U half way through and as a IF he already has 14goals and 10 assists. Would like to use him as a ST so I don’t have to drop major money on one my 2nd season.

Not sure as it was a readers submission but I suspect it may take half a season or so.

[…] players by FM veterans over the last two iterations of the game. Players like Youri Tielemans, Memphis Depay and Kristoffer Ajer (the greatest bargain of all time?) have gained momentum of late, but only in […]