This FM 2015 player profile of Felix Passlack shows a very talented wing back with great versatility and the potential to star for the best in Europe. Please note some of Passlack’s attributes can vary, like his determination for instance, hence the large change in determination from my initial save to my test save….this is common with very young players. Either way, he has bags of potential and despite starting with low ability can develop into a star top flight right back.

In my test save Passlack developed insane physical attributes, excellent attacking ability for a wing back and decent mental attributes. I’d say those mental attributes are the weak area but with such fantastic physicals and technical ability I think he covers them up well and at just £2.25 million Passlack is a must buy. Note, you must act fast though as the approach to sign option will soon disappear and when it does the asking price will soar.

Check out the screen shot below, sent by one of our readers, showing Passlack’s progress in his FM 15 save: 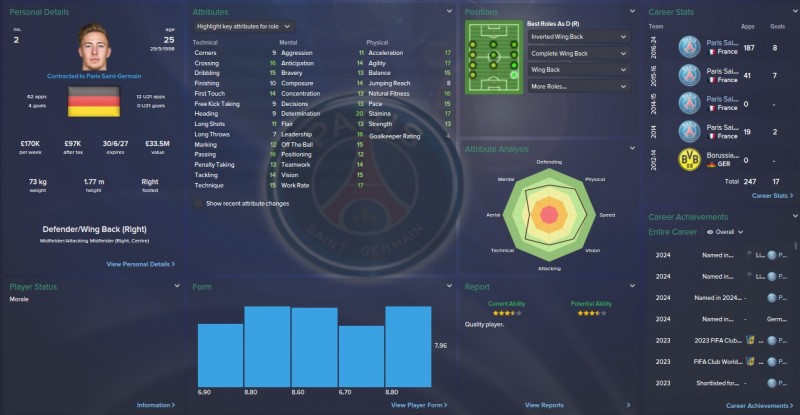 From BVB to Bayern. What a surprise

Regarding his physique. I’m in the year 2017, so he is 18 years old. But he almost hasn’t grown. How old was he when he became this beast, in your game?

The profile has his age which was 24. Passlack starts the game with varying attributes and stats such as his height and determination etc.

Yeah, i understand that. But did he just slowly grow, or was it at a certain age?

No what I am saying is that he started the game with a different height, not that he changed as the game went on. Its either due to a slight change from one patch to another or that his height can just vary at the start, why they would set it that way I’m not sure.

Godly Wingback; Spend 53mil to get him from Bayern before they start to use him.

Yes I signed him in a couple of saves and he proved an excellent investment.