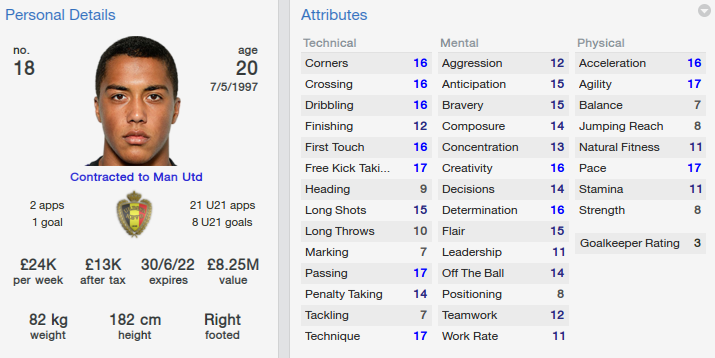 This FM 2014 player profile of Youri Tielemans shows an outstanding young Belgian talent. Lots of you have asked for this profile and been rejected due to SI limiting him to games with Belgium loaded as playable. Well, Tielemans is now visible for all loading the large database and I’m happy to say he’s well worth a bid. Best used as advanced playmaker he should cost around £10 million. Quite expensive for a 16 year old, but not so much so considering his potential sell on value. In Casey’s test save the wonderkid developed fantastic technical skills and very good pace and acceleration. He’s one tricky customer but could get even better than the screenshots above if played often at a top club.

got him for only 4 mil. euro + clauses ,at 17 years. old , he got excelent attributes at this early age(both tehnical and mental ) he could became world class ,at 22,24 years ,i think he might became better than Hazard !

He is good, very tough to compare to Hazard though due to differing positions, I don’t see him as been at that standard, for me Hazard is a league of his own with some of the true greats in this years game.

In real life ,yes is very tough to match him ! but in this game ,if you compare the stat’s between them, at 17 years old only psychical stats are lower than Hazard, stamina,strenght and agility,workrate, but Hazard has the age advantage 7 years older , in 7 years this guy i guess he can develop much better than Hazard ,in the game of course :):) he already much him or even better in some areas, but nobody know in real life ,how he came progress !

Youri’s stats in the first year aren’t anywhere near Hazard’s. Also Hazard’s starting ability is 175, Youri’s starting ability is 112, and Youri can only ever hit a maximum PA of 180 and that is only if you are extremely lucky and on a random occasion, so even in the most unlikeliest of cases Youri will never be better than Hazard can be. Like I said, he’s a great player for sure, but not on the same scale as Hazard for me. What you need to remember also is there are hidden attributes that make Hazard a complete monster that Youri just doesn’t have and these also apply to the difference in their positions, ergo its very hard to compare them due to the different positions they play.

Just missed out on picking this fella up on a free for…Salisbury, in Championship! Gutted.

Thats frustrating would have been a great snatch.

Bought him for 250k at 17 due to contract expiry, got 5 goals and 6 assists in his first 12 matches for his first half-season, worth 5 mil already.

He’s a snatch at that.