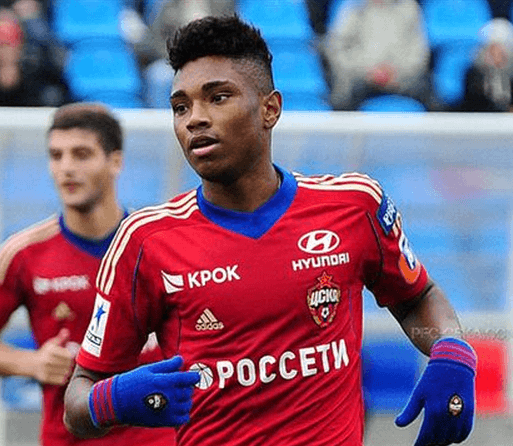 This FM 2014 player profile of Vitinho shows a talented inside forward who can grab you 10 plus goals a season and score some real screamers. During my test save this kid developed amazing long shot ability and gained some good attributes in key areas like dribbling, creativity, flair, off the ball movement and acceleration. I reckon playing at a more prestigious club could have helped him develop further, as would human management. You could use Vitinho as an advanced playmaker but inside forward seems to be the best option.

£19 million is too much and just bare in mind this guy is part owned by a third party, so chances are you’ll have to pay them some sort of fee to have Vitinho available in the match day squad.

Vitinho took my Celtic team apart in the Champions’ League last night. From 2-0 he led them to a 3-2 win and I couldn’t stop him.

So he went from Botafogo to CSKA Moscow for £8million, then back to Botafogo the next season when his contract runs out, then leaves Botafogo and joins again on a free, and then to Shakthar for around £13million?? He’s not the kind of player I’d go for, but if I could get him when his contract is expiring on a free I would for sure. I’m not sure his future value does his attributes/av. ratings justice.

Yeah, interesting journey he took there. But still a good signing if he suits your team and as you said would be worth it no matter what if available on a bosman.

I was able to get him for free after my first season, just try offering him a contract at the end of your first season and he should request a transfer or join for free

He’s a bargain at that.

I was able to get him for free (expiring contract) after 1st season, and then i have to decide use him or bakkali as my backup inside forward behind cristiano ronaldo…so far he is doing good

Not a bad decision to be left with, both quality talents.

Vintinho looks great, but there is something that have crossed my mind about his attributes, which I find a bit odd.He has good technique at 15, but a very poor first touch at only 3. Maybe a mistake from SI? I mean only 3! it is hard to find any player worse, and in my understanding technique and first touch is in someway related. What is your thoughts on this Darren?

Barcelona is offering 20 mil for him in my save.

in what year mate?

Got him on a free after the 1st season. Only problem is that I already have Neymar and Pedro for my LW/LIF position. Then there’s the non-EU player quota and with Balanta, Doria and Neymar in my first team, guess I’ll just have to send him on loan for a season until the other guys get their Spanish citizenship during the middle of next season.

That is the problem with buying too many young foreign players.

incredible player！ able to get him with southampton for 2nd season around 5m. He score 20 goals and 14 assists by playing attacking midfield. Chelsea offer 30m in my third season and i sold him for more transfer budget.

Sounds like a great record and good return too.