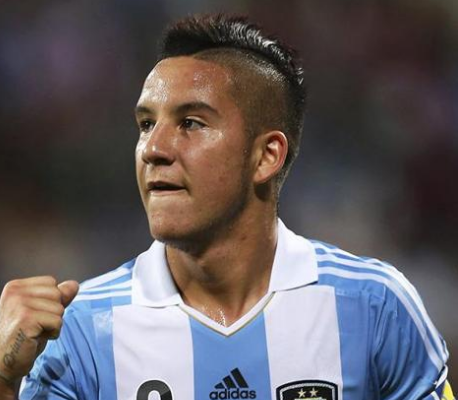 This FM 2014 player profile of Sebastian Driussi shows one of the best cheap players available. He has physical stats to die for and a fierce shot to boot. Thanks to Robert Clark for the screenshots, in which Driussi becomes an absolute beast and one of the worlds best players. Robert just had this as a test save, so human management was’t a factor in Driussi’s development. But looking through those attributes I will be scouting him in every save from now on. Insane shooting ability, with superior physical attributes unrivaled by almost anyone and a superb understanding of the game make this kid a must buy.

Only factor that rates him down is the random distribution of attributes on a game to game basis, so you may not be able to get the same end product, this is made even more volatile by his flexible PA. But for just £1.6 million (his release clause) this kid is more than worth a punt. If he could come even close to the screenshots above you’ll have a real gem.

I have a save with River Plate…and I have to say that I am not surprised….really. Driussi, Martinez, Balanta, Lanzini, Simeone (Simeone’s son) and 2 or 3 more that are probably to hard to manage, that is to make them reach their potential :/

Actually, can you check Giovanni Simeone, in 3 of my 4 saves – River Plate, Benfica and Man City – he’s been bought by Chelsea. Need to know if he’s really that special. To the River Plate staff he is…but different people see different things.

He;s not much more than average in two of my saves TBH.

This might sound absurd but because he’s so young and can get some great all-round attributes, like anticipation, and starts with good tackling, do you think he could be a good sweeper? Obviously wouldn’t be the best thing to do with him, but he could do well attacking from the back.

That future screenshot is out of this world though, in fact the last few wonderkids you’ve shown have been amazing (Evangelista, Musa etc), truly world class.

Yeah he is very good, TBH I don’t see him being a good sweeper, there’s still a few stats that need to change and it always harder to develop attributes that are unnatural to the player.

Who is better? him or Angel Correa?

Seen as we have profiled Driussi but not Correa yet you’ll know just as much as us. Based on the evidence seen I’d say Driussi but only because of these screenshots.

i must say Angel has pretty much become the new Messi for me at Napoli…. won World Golden Boy in his 2nd season only at 20 years old… had 30 app 11 goals 20 assist in all comp…

Thats a good record. Correa definitely has potential, the same flexible potential as Driussi in fact so he can certainly do well…just in my saves he hasn’t reached the same level as Driussi when managed correctly unfortunately. But it will always vary on what you have seen in game so for you Angel will always be better.

What the f…his stats are beyond imagination…I never managed to get him up to such riddicolous level…How do you manage to train him so good? You give him a lot of first time play or loan him out?

As mentioned in the post the AI was managing him here. Must have had a very generous PA rating compared to your game maybe, but you can see in the career history how he managed for game time.

Thanks but thats not far enough in the future, unless he’s developed beyond belief I don’t think there would be much point in showing a profile from then.

but open the Editor,he has only 158 Potential abillty ! how can he become that good ?

Where did you get that from? The real time editor or the proper original editor? Either way I think you are wrong, I’m almost certain he has flexible ability, so some saves he could have 180 while others it could be as low as 150. All as mentioned in the post.

so this player colud be world class in your game,and ordinary in mine ?

In the original editor he has a PA of -9 which means he can a potential of anything from 150 to 180 from save to save, its how SI make the development more realistic. So yes he could be a world beater one save then average the next. The real time editor will show stats and information in your actual save so it will tell you exactly what his potential is for your specific game.

i noticed on one save his determination was 20 at the start, do you think that shows his potential might be higher in that save?

I don’t think so, the attributes he starts with will be different from save to save but always on an even keel overall as his current ability is fixed like everyone else. All determination does is help a player achieve his potential (among other things) it doesn’t mean he’ll have better PA. So while it won’t indicate a higher PA figure, it will mean he can fulfill the potential he has easier.

in my game, he has a 3.5 star potential…do u think he can become as good as in the SS?

That rating is your scouts opinion and is based on your team all your players and other factors. There is no way of saying.

could you train him as a striker

Definitely, I think the future profile shows that clearly.

Sounds like the perfect Shadow Striker with those stats, considering getting him for my Juve side for when Tevez starts to decline (also maybe tutor him?)

I’d agree with that and Tevez should be a great influence.

He is talented but not developed greatly in my test save so until he does I won’t be profiling him I’m afraid.