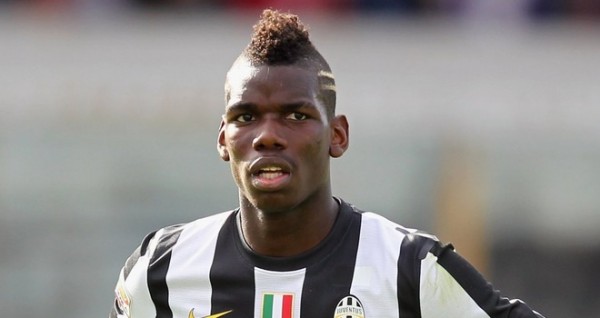 This FM 2014 player profile of Paul Pogba shows one of the best central midfielders in the game, a real beast both on and off the ball. He is already a huge player at the age of 20 and that is why Juventus don’t want to sell him at all. I was able to get a 200 million offer accepted but I couldn’t get any lower price than that at the start of the game. In my test save he moved to Manchester City for just over 40 million pounds.

Speaking of all that money can make you dizzy but not as much as his future profile, he is almost perfect. His physique barely needs adding anything, his mental attributes are world class, he is a master on the ball but also a solid tackler. His only real flaws are two: he can’t take long throws and corners. Normally I don’t give a 10 out of 10 for such expensive players but it would be a real shame to lower that rating for a player of this quality.

And to think IRL Man U let him go for peanuts. What a terrible decision.

We all make mistakes ;)

They didn’t ‘let him go’ as such. You know how you can approach to sign a player on FM? Yeah, Juventus knows that too.

That is true and Juventus are very astute when it comes to such moves. But they could have done more to keep him I guess.

You are so right, he left because the ever-arrogant Ferguson refused to give him any assurances about playing time although a contract was on the table. Juve came and told him he would get more games and be central to the future of the midfield. United didn’t offer that, merely a slow introduction into the first team. How we could do with him at Old Trafford, would have saved us 27.5m on Fellaini :/

And there he is, the beast, incredible I suspect he can become quite a bit better under human management.

Got him for 28 million pounds in the first January transfer window.

Most players develop better under human management, I would be surprise if such a great talent wouldn’t ;)

I’m a United fan and he went for nothing but some petty compensation for training. Should of just give him the contract he wanted. He was awesome in the CL tonight and we nearly let the same happen with Januzaj until we pulled our finger out.

Hurts as a Man United fan to see Pogba. Should’ve been manning the midfield now along side Carrick. :(

I wonder if I can buy him at my Man United save. Him or Koke? Speaking of Koke, how is he at FM 2014? Still playing demo and he is at 15m release clause but only 3 stars potential according to my scouts.

You can buy him but don’t expect a cheap deal :) Koke is good but not nearly as good as Pogba in my test save.

WOW…that is ridiculous stats but not still not as good as Edgar Davids in season 01-02, he is the best player that I have ever had in football manager games!!

I’m sure those attributes can go even higher.

Hey, i need an anchorman or deep lying playmaker to replace Xabi Alonso in Real Madrid save as he is getting old and Illaramendi and Casemiro have not impressed me. Who would you think would be best AM or DLP???

WOW! he has 14+ in almost every stat!
he can literally play anywhere kind of like yaya toure

Marquinhos will be profiled sooner than the other two, Diego Costa and Neymar are already very well known.

Hey Johnny. Have you considered Marco Benassi from Inter, because I know with human management, he can become very similar to Pogba, maybe even better. I will be happy to send you a screenshot.

He will get a profile, good but not as good as Pogba in my save though so you can send that screen shot if you want.

He looks amazing. I just wish Juve would sell!

Position is MC, roles are deep lying playmaker / advanced playmaker / box to box midfielder / central midfielder, he can do all of those just as well.

could you do a profile of Levin Oztunali from leverkusen?

He isn’t available in my save.

marco verratti or pogba mate? thanks u do great job :D

I dont seem to be able to buy him no matter how much i offer, highest was around 60-70 or so! Is it possible that it can have anything to do me offering the bigger amounts over 48 months and not “here and now”? All of you on the site do a great job btw! Check it out daily for more players and I use many of your recomendations in my own saves :)

Thanks, glad you find our work useful. As for the price, all asking prices we display are with whole sum up front, if you offer installments chances are they will ask for a bigger sum.

I tried to buy him just for kicks at a big team and they wouldn’t let him go for 60 million.

My offer was made with Arsenal, they asked for more but eventually negotiated the fee down to 33 mil. However, with such important players there are other variables to consider as well, such as the club you manage and the relationship you have with the Juve manager (especially if it’s a bad relationship).

I’ve bid 120 mil for him (2017) and Juve will just not sell him. I wish I had targeted him at the beginning of the game. But still got Veratti and Grotezka.

If you have those two you’re pretty well covered, surely don’t need to spend over 100 mil on Pogba if you have them.

Guys please can you profile Suso (from LFC ) .. I can’t find a profile

We will if he develops well in our test saves, so far we don’t have a test save with good development for him.

a very rare type if he’s a pokemon, that genius and strong combination!

Tried to buy him back on Man utd at the end of the first season, guess what juventus wanted for him,…… 290 MILLION, no i did not mistype that, two hundred and ninety million my god..

Ya, in my save, I bought him for 33 mil now and 7 mil in 48 month installments for Man City. And at just 22, he looks like a certain beast. I’m already 1 year down the season and he got much better stats then the screenshots above and even overtook Yaya Toure… Put him on heavy training and he did exceptionally well. Truly great player this year!

HAzard can u send me the screenshot of your Pogba? And can some 1 tell me how can i develop well the stats of my players? They dont increase and im on my 2nd season :(

Tried to sign pogba £33m up front 1st day on the game as Man Utd. They won’t budge for anything less than £50m up front. Declared my interest and he says he’s interested in joining but nothing changes. Any advice or can anyone recommend a hard tackling strong centre mid?

I tried to buy him with Man Utd, trying to unsettle him, and it’s worked – he’s submitted a transfer request. However, Juve’s asking price is still £45m… I’m going to continue in a separate save and see how much I can try get him for.

Yeah, Juve want to keep him at all cost.

Do you have some recommended player like pogba ? i am looking for box to box midfielder like him,but his price is too high for me, now i am in 2015/2016 season .

not cheap but the best young midfielder in the game and he will be worth it no matter how much you end up paying for him.

prowse is as good

Lol ,i manage it to buy him from second season in my Monaco save,didn’t expect this to happen that soon, pretty cheap y guess (11,5 million initial fee + clauses in total 32 mil after 48 months )
i manage to unsettled him be making constant offer’s to his club and make comment’s in press ,and after 6 or 7 offer rejected ,he became very unhappy at his club, and became transfer listed by request after all ! my strategy was succeed :):)
didn’t expect this to happen that soon at the start of the second season . But with patience you can succeed :):) I tried the same strategy with Lamela and surprise he is listed by request ,now i made another offer and it was accepted
The A.I didnt want to keep unhappy players i guess, for me, a player that i really need i will keep it with all cost ,even tied with handcuffs and dont let him go, but the A.I seem that it’s not that intelligent here !