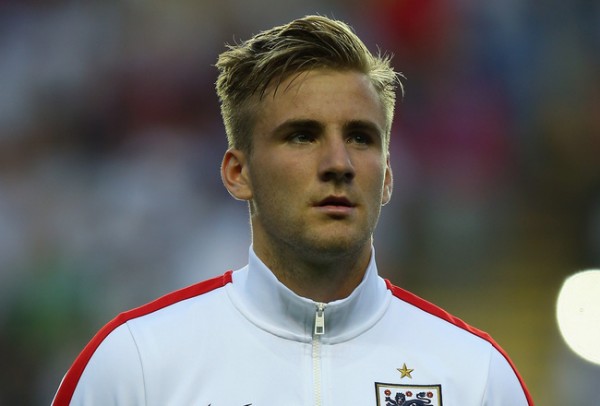 This FM 2014 player profile of Luke Shaw shows one of the best young talents England has to offer in Football Manager 2014, a young left back that can become a top asset for any club in the world. At the age of 17 he already has enough to feature in most Premier League sides but what’s best about this kid is his potential.

In my test save he developed very well despite spending almost two whole seasons on the bench at Bayern Munich. His physical attributes in the future profile are solid, as are the mental ones, which are still in development at the age of 24. What really impresses are the technical attributes, 16 for crossing, dribbling and tackling. He was then bought by PSG for a hefty fee and he surely delivered, 9 assists in his first season and a solid average rating. If you have the money this kid is a must buy.

Easily one of my favourite young players around.

Who is your pick of the lot from this years LB wonderkids between Alex Sandro, Luke Shaw and David Alaba?

I like Luke Shaw a lot, Alaba has better current ability while Sandro can be world class as well. Tough choice but you can’t go wrong with any of these three.

Hope he can develop even better in my southampton save! Looks good though.
Btw. are you going to do a profile of Robert goncalves or hasnt he developet that well in any saves yet?

If it’s the Fluminense kid, not developed too well in my save. But does seem to have potential.

Hey Darren. Do you have any plans on doing a report on Leon Goretzka? He looks very, very good this year.

Karp* Sorry for calling you Darren ;)

hey I need help, I need a good AM R or L, I’m thinking of buying Viktor Fischer and I can’t find anyone else, can you give a list of AM (R or L) or wingers you think have good potential? Also should I buy Januzaj or Maximilian Meyer ( haven’t see his profile yet) or is there any better young AMC? thanks.

Please answer, I know this is a little too much :(

Please check the players index, sort the list by position and check the profiles, that’s why we make that list: http://footballmanagerstory.com/scout/best-fm-2014-players-list/

Bought him in my save but he is not improving, have great facilities, great coaches, he is playing a lot. I cant understand it.

Not improving in how much time? Usually I look at improvements after at least half a season or an entire season.

Then he should have made some progress, not huge but at least some attributes should have gone up. I can’t really understand why they haven’t though.

looks like a great replacement for leighton baines in my Everton save!

How do you train this guy??. I had him training as a wing back for a season, He hardly improved, I tried putting the training up to heavy and he complained. Then this season I’ve tried concentrating on individual areas e.g crossing. Still no improvement. Help!!!!!!

I don’t really mind the training too much, just make sure he gets enough playing time. Usually I only set up individual training when one of the coaches suggests that in a backroom meeting.

I must be very, very lucky, I got him free, yes, FREE on my York City (Yes, you hear – well, read . right, York City! I manage to take York to the Championship by 2016, he was without club!! WTF! Haha! I had to pay him almost the salary of my whole team but it worth!

BTW, what Pack of faces do you use? Almost no one have faces in my game, just Ronaldo and Messi and others

I found out what happened, he had an injury for almos 12 months, and it seems Southamptom set him free, giving him the freedom card (I am playing in spanish, I do not know if in english is “freedom card” this is just the exact tranlation).

When I saw him I was like “He would not come here :(” But I think I would not lose anything if I tried so I offered him a contract and his agent said: “My client does not want to join you, but if your offer impresses me it could work” Haha I offered him the top wage, with increase if we ascend to the Premier and I do not remember what else and he accepted!

BTW, sorry for posting again, if I have already started a game, if I load this faces pack it will appear in saved game? Or I have to start a new game?

No, you don’t have to start a new save.

There are a few dozens of Russians at CSKA Moscow, maybe you have a name?

The starting screenshot has been updated for the new patch as have all of them, whereas we haven’t updated every future screenshot. They are from different patches, SI updated his height in the most recent patch.