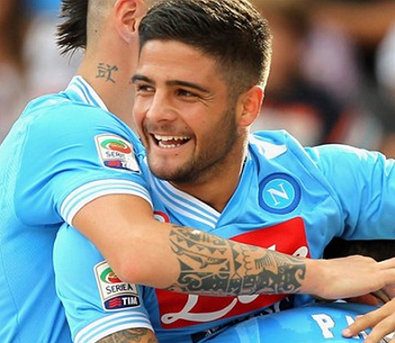 This FM 2014 Player Profile of Lorenzo Insigne shows a skillful prolific inside forward who is reasonably priced. Good speed and technique underline this kids foundations, but its in his flair, set piece ability and agility that he becomes a superstar. Known for doing the unpredictable, Insigne is ideal for the role of inside forward starting at AML.

During our test save Man City paid £25.5 million for the Italians services and he performed very well with great average ratings and plenty of goals and assists. I think this guys worth a bid at £15 million.

Great player , i play him in my Spurs carrer as AML inside forward . Can you do a scout report for Alex Sandro ? 170PA. Also , wgy full backs have such little average ratings? For ex : Walker in 36 had 2 goals and 6 assists and an avg rtg 6.88..

He certainly is, the word explosive sums him up I think. We will profile Sandro at some point, just need better future screenshots. I wouldn’t worry about the rating thing, I think that has been an issue with many players and positions since the most recent patch, unless this is SI’s new vision for average ratings of course.

Tx bro . Wenger should hire you.

Haha, now that would be a job offer no FM fan could turn down :)

Did you developed him on that save or the computer? Thought he should develop more..

It was the CPU, not human management so I should think he can develop further.

Thanks, you should have a look at El Shaarawy! He´s amazing at my save with Arsenal and got 5 stars potential by my scouts.

He certainly is, one of the best, we are just waiting to find the right screenshot to do him justice.

Yeah his composure was the main let down last year too.

I think with 2 prefered moves you can get the best out of him:
– look for pass rather then attempting to score
– runs with ball often

He and Veratti are the new italian ‘giants’.

if you have the Italian league selected, then you can you can buy his younger brother Roberto, I played as Napoli on FM13, the Insigne bros tore the league up for me

Nice to have a brother combo, we’d profile him if Roberto had developed better in our test save, looks like he could be promising.

Will there be ss for Ginter from Freiburg?

We will, just need a better future screenshot than the one we have at the moment.

Im in 2014 and his stats are ALREADY better than the 2020 screenshot! (Except FKS)
Probably down to regular starts for my Napoli team.

Well I’d be extremely surprised if ALL his stats are better, if so please do send a screenshot.

Insigne – the Italian Superbeast! He’s a real bargain for 15m because he can turn world class under proper management. He is the leading scorer and goal creator for my Liverpool side. His set piece abilities also provide a very valuable bonus. Put it simply when Insigne plays well, my team usually wins. Check out his screen shot at the age of 25. Led the BPL with 12 assists and won the English Player of the Year award this season!! http://i875.photobucket.com/albums/ab312/goraiden/LorenzoInsigne_OverviewProfile-5.png

Looks very good, he’s been insane for me with Napoli in the first season.