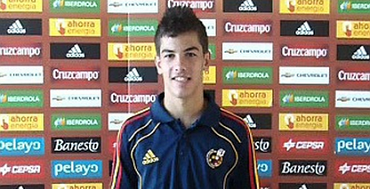 This FM 2014 player profile of Curro shows a playmaker maestro with a rounded game that can be used at almost any level. Best used in the centre of midfield probably as an advanced playmaker, Curro can also play deep lying playmaker and double up as backup on the left wing and AMC. In my test save its Curro’s passing, long shot ability and creativity that underline his ability, but the well rounded stats add to his all round game. He doesn’t look too exciting in 2013 but that is due to a low CA, don’t be fooled as this kid has very good flexible PA.

£9 million does seem excessive but this could drop with time so might be worth keeping an eye for if and when that happens.

Hey.
Are you gonna do a profile on Kaan Ayhan from<Schalke 04 – his stats aren't that good but he gets 4 stars and just got a 10m pund offer in him in the first season. so i figured he might have some hidden potential?

He isn’t visible in my saves must need Germany loaded as playable.