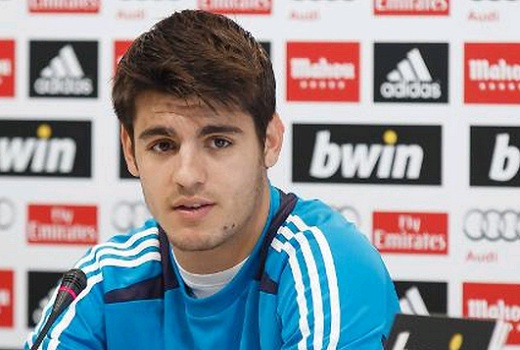 This FM 2014 player profile of Alvaro Morata shows one of Spain’s most famous young talents, a player that might become Real Madrid’s next star. He is quite talented in FM 2014 too and you can snatch him from Real Madrid for 15 million at the start of the game, not an unreasonable fee considering his potential.

That potential wasn’t fully reached in my test save though as the lad had just one season as a first team regular, at Tottenham. He delivered 14 goals in that season, then moved to PSG for around 13 million but ended up warming the bench. The potential is there though, you just have to get him from Real Madrid as soon as possible and give him first team football.

I bought him in my spurs save, played him straight from the start. He scored 14 goals in 32 games in his first season, has 5 goals through 10 games the next season and his stats are almost all better than his 27 year screenshot… the kid has it all, can’t miss prospect! Sign him up!

Him or Benzia? Can’t decide.. Benzia has flexible PA though.

Depends on how good they both are in your save and what you want from them. I’d scout them and go off the reports.

Was actually able to sign him on a bosman in my Chelsea save during January 2015 I rotate him with Lukaku with both getting a fair bit of game time. During his first season he hit 14 goals and improved his positioning,first touch and off the ball then in his second season he hit 26 goals in 38 starts whilst improving massively and can be deployed as a complete forward,poacher and as a false nine with someone like oscar playing as a shadow striker due to his improved positioning and off the ball.now worth 28 mil