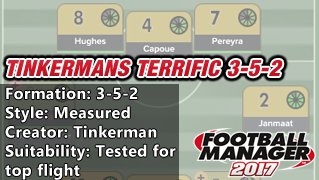 Welcome to another tactic in our Best FM 2017 tactics series. This tactic is built on three at the back which is becoming increasingly popular in world football at the moment. There are also two attacking wing backs, three players in the middle of the pitch which ensures we are not overrun in midfield. Finally the two strikers cause havoc, scoring goals and creating for eachother. Testing was completed in the latest patch with Watford. But before moving on with  this tactic, don’t forget to check out our other killer tactics for football manager 17. :) What I love about this formation is the strong spine of the team, it is very solid through the middle of the pitch. The block of 3 centre backs, 3 central midfielders and 2 strikers really help to dominate games. Of course this leaves a lot of work in the wide areas for the wingbacks, however if you have good wingbacks with good stamina they will be fine. This tactic also allowed my strikers to score 49 league goals between them which was nice as I enjoy my strikers getting the goals.

GK – sweeper keeper (support) – Just use the best you have and focus on other key positions for transfers first. I purchased Predrag Rajkovic in January and he looks a fantastic prospect.

CD – central defenders (defend and cover) – Typical attributes for centre backs are important. You will need at least 5 good centre backs in your squad depending on how many competitions your in. I would recommend a left footer on the left side if possible, it makes passing out from the back more comfortable. Also, I would generally play the most pacey defender in the centre with the cover duty.

WB –  normal and complete (support and attack) – I decided to have one wing back more defensive than the other to try and give the team some more defensive stability as I didn’t want both being caught forward and getting hit on the counter attack.

CM – central midfielders (support and attack) – The two midfielders with attack duty bomb forward and chip in with goals and assists whereas the midfielder with the support duty hangs back to give more defensive stability. Signed will hughes from derby and he done really well in the cm(A) role.

ST – deep lying forwards (support) – Important players in the team as they are relied on for the majority of goals. I like to play different striker types together when possible e.g one quick, one powerful in the air. The team instructions are very simple, went for a standard approach and a flexible team shape. Everything is self explanatory. The majority of the core instructions are included with the individual player instructions, therefore, the download is crucial to the tactics success.

Best Tactics for FM 17 : the Results We focused on the league and won it with 85 points.

These tips are very important so please use them for the best results.

2. Once the file is downloaded move it to the following folder documents>sports interactive>football manager 2017>tactics

Finally, thanks for reading. Please feel free to leave a comment if you have any questions and I will try to respond as soon as possible. Hope you enjoy :)

Tactics from differant forums {around the world} - Page 32

Hi, Left wing back takes left throws in and left corners. Right-right side?

LWB – left throws
RWB – right throws
Either wing back – any sided corner. Therefore list the wing backs in order of highest corner attribute regardless of which side.

Excellent tactic, the only thing I have changed is Team Instructions to Defensive but that’s just my style. 16 Games undefeated with Villa. So impressed with the position CD Cover, average rating and interception figures huge. Thank you

Thanks for your comment! Glad it’s working for you!!

Great tactic. I’m currently top of the league at the half way point with a semi-pro club and most of the teams in the league are fully pro.

Is this tactic also useful when using bigger team?

I only tested with Watford to be honest, but I don’t see why not :)

Great tactic, even if it looks like handball it is strong Defence and very result driven.
How do you modify the tactic when you definitely need to score or when you want full Defence?

I kept it exactly the same throughout the season. However it would be a good idea to have an attacking and defensive version when needed. But you can be successful with this tactic alone.

This tactic is amazing, took me from vanarama national north to the championship in only 5 seasons, and won 3(!) titles (1st-VNN,3rd-VN,13th L2,1st L2 with record of points and 1st L1).. only thing i changed in lower leagues was the complete wing back to wing back

That’s great! Thanks for the feedback :)

Superb tactic. 2nd season still unbeaten and title won with 5 games to go. I’m West Ham and Callum Wilson and a player called Harold Preciado have been awesome. I changed the right wing back to cwb too.

Worked great at start with Liverpool by winning the first 15 games in a row, but tactic seems to be struggling now,Lost last 4 games, has the computer sussed it out

Would it still work with the mentality set to attacking instead of standard? Specifically attacking as I like my team’s playing that way

Is it possible to set the mentality as attacking instead of standard? As I prefer my team’s playing that way

Mr. Tinkerman. Thank you for sharing. I am using this with Wycombe, so maybe I dont have the best team for this tactics. But for me and my team, your tactic seems to get “stale” and I mean it like I do good for 5-7 games, I might even win them all, but then I do terrible for other 5-7 games. Do you have any recommondation.

Both forwards DLFs? No DLP in front of deffence and no BPDs but stil play out deff. No specialist in midfield. This is not a tactic this is an exploation of a bug in match engine. Not to mention the club and its succes. Where is the fuckin passion.

Like it. I’ve settled with a counter tactic when struggling, seems to help.

What bug? My Blackburn team still sit 8th, although FA Cup semis do beckon. Tried many tactics this year all promised so much this is delivering!

“I recommend for players with a high aggression attribute always change to ‘ease off tackles’.”
You mean when they receive a yellow card or at any circumstances.

I have to say….this is truly astonishing. I used your tactic in fm15, and it was the best. Now this, and still the best. What else can I say? You rock